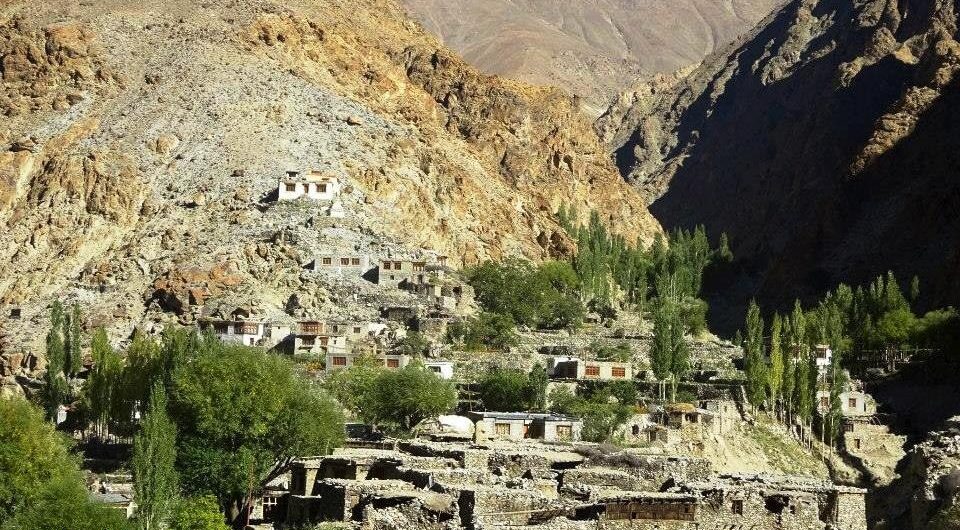 Dah Hanu or Dha and Hanu, popularly known as Aryan villages of Ladakh, are located in Dhahanu valley in North-East of Ladakh, about 160km from Leh town.

The visitors are required to obtain an inner line permit to visit these Brokpa villages. The villages have both Buddhist and Muslim population and also have their own animist pantheon of Gods. Residents of Dah Hanu are best known as Indo-Aryan breed. Dard people of Dah and Hanu have an Indo-European appearance with high cheek bones and sharp features. They look quite different from other Ladakhi people. Dha and Hanu are two separate villages in Dhahanu valley of Ladakh, about 160km from Leh.

The valley is accessible by two routes — one by taking a link road from Khalsi (Khaltse) from Leh-Kargil highway and the other from Kargil by using road passing through Batalik. Hanu is in fact divided in three sections. The main Hanoo village is about 20km above the main road but the population has spread across the region in the past years. The first village, from Khalsi side, greets you is Hanu Thang that lies on the Khalsi-Dah road.

One has to take a sharp right turn at an isolated area, about 2km beyond Hanu Thang and a military check post stops visitors to check the identities, special permits and they may also check the whole vehicle prior to allowing vehicle cross the barrier. At a distance of about 8km comes Hanu Yogma village, on the other bank of a small tributary of Indus River. Lower part of the ancient small village having about 80 households looks like ruins but most houses are new and construction is ongoing.

A high school is also in Hanu Yogma and children from nearby villages come here for education under military surveillance. About 6km beyond Hanu Yogma is the main Hanu village called Hanu Gongma (or Hanu Goma). Hanugongma is settled on the left bank of the tributary of Indus River below a steep towering mountain peak. The village has almost 100% conventional houses built with cut stones and rubble.

The architecture is not so good and it seems that the houses may collapse anytime as there is no use of concrete and little mud mortar is used from inside only. Many villagers keep their cattle underground by digging out the mud and making space for them. Hanu Gongma has a primary school. The people are not much familiar with the outer world and very few of them visit Khalsi, Leh or Kargil for major purchasing.

Most of the population has never been out of the Ladakh. While the web of roads is being spread by Project Vijayak of Border Roads Organisation (BRO) in Dah Hanu valley, the Indian Army is taking care of all the needs of people like electricity supply, education, and water. The last village of the valley where tourists are allowed to visit is Dah (Dha). Maratha Regiment is posted here and visitors need to show their identity and permits to them before entering Dah village of Ladakh.

The entire region is very close to the border, so military movement remains 24 hours a day and 365 days a year. The military keeps an eye on unwanted movement. Unlike the Hanu Gongma village, where no guesthouse is available, Dah has a few guest houses and homestay units. As Dhahanu valley is at little low altitude, ranging from 8,000 ft to 10,000 ft, villagers grow apricots, nuts and grapes, besides barley and wheat.

People of Dah Hanu valley, especially women, love gardening flowers. Colourful flowers of different varieties can be seen grown everywhere in all the Brokpa villages. The women of Dah Hanu valley loves to adorn the fresh colourful flowers as crest on their heads and headgears. One can see almost all the women having adorned flowers on their special traditional scarf.

There are many misconceptions about people of Dah Hanu that they are fully built having their height over 6ft and sometimes up to 8 or 9ft. In fact, they are average in height. Men are ranging from 5ft to 6ft in average height.

Another misconception is that foreigner women come here for mating with the local men as they believe the men here are of the pure Aryan breed and best in the world and the ladies want to conceive a child of a similar breed. Such stories created curiosity among the people and they came to explore the hidden valleys of Dha Hanu.

People of Dah Hanu (Dha Hanu) are not fluent in Hindi, nobody knows English but they speak their own traditional Dard language. Many youth and those who are into tourism business understand and speak Hindi.

Dah Hanu villages can be pronounced even as Dha Hanu, or Dah Hanoo

Dha Hanu valley is reachable from Leh and Kargil. From Kargil, the valley is reachable via Batalik road. The distance is 80km. This road begins (about 2km from the town centre) from where Kargil town ends (on Kargil-Leh highway). If you are in Leh, drive on Leh-Kargil-Srinagar highway until you reach Khalsi (Khaltse) from where you need to take a sharp right turn along Indus. By both ways, it will take around 4 to 5 hours (one way). The distance is 160km from Leh, 70km from Khaltse, 80km from Kargil.

Although Dah Hanu is in low lying area, the cold and snowfall in Ladakh make reaching Dhahanu valley little difficult. So, the best time to visit the villages is from May to October.

There are many guesthouses, homestay units and camping sites in the area. 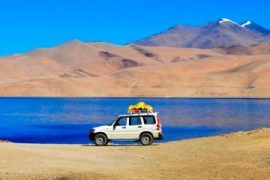